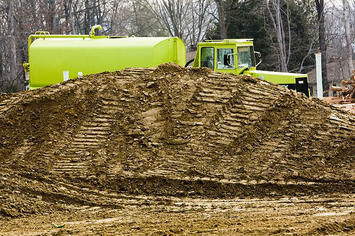 We can't afford outmoded attitudes in housing development anymore - not as businesses, not as citizens, and certainly not as development professionals. As development consultants, we're often asked to provide detailed input on project design and the marketing of developments throughout the United States and Canada. We usually work with a local team of engineering consultants that provides construction drawings and serves as an intermediary for the project with local governments. We have concluded that the choice of selecting the engineering consultant is one of the pivotal issues for the success of a development. The developer has to be the one to hold the engineers accountable. Otherwise, all design will continue to be done to minimum standards instead of excellence.

The first involves a small proposed neighborhood in Texas. The initial design was drafted before either the site boundaries or floodplain were accurately surveyed, and yielded a total of 35 lots of 0.6 acres or more. Rick prepared an initial revision of the original design, resulting in a more aesthetically pleasing and efficient neighborhood, while maintaining the 0.6 acre minimum lot size. Accurate boundary lines, contours and floodplain were eventually furnished to create a precision plat for submittal. The developer requested that Rick update the revised design, and indicated that he was willing to sacrifice one of the lots in order to allow a more spacious entrance.

While preparing the precision plat Rick realized that he didn’t know why the lots were at least 0.6 acres instead of the more common 0.5 acres on lots without city sewer. In two rounds of questioning, the consulting engineer indicated that the minimum lot size was 0.6 acres, or 26,000 ft². The area of 6/10th of an acre is actually 26,136 ft², so Rick questioned the engineer again. This time, the engineer explained that the minimum lot size was actually 0.5 acres, but his firm had developed a “rule of thumb” that 26,000 ft² was the 0.5 acre lot net of easement areas. However, in the specific case of this development the only easement required was a 12’-wide utility easement along the front lot line. The extra 0.1 acres per lot was a “fudge factor,” developed over time to compensate for the well-known difficulty in computing precise lot sizing using existing CAD software.

The “land surface based” technology Rick used to create the revised design requires no additional time to obtain precision areas, so he was able to easily design each lot to meet the actual 21,780 ft² (half acre) minimum exclusive of the 12’ easement. The new design eliminated the fudge factor, and yielded 37 lots, including the more open entrance area (three more than expected). Furthermore, reductions were made to the length of street..

“Fudge factors” are rules of thumb intended to make the engineer’s work easier, and to provide enough margin in the plans to account for omissions or miscalculations. The problem with fudge factors is that they adversely impact the profitability of their clients’ projects. The chart below demonstrates the differences:

Eliminating an imprecise fudge factor would yield a $225,000 increase in gross sales. Since the only increase in costs were per lot consulting fees, almost all of the gross revenue would drop straight to the bottom line. In addition, the community would benefit from a more attractive neighborhood with substantially less street pavement maintained in perpetuity, and a higher property tax base. If the developer was unwilling to sacrifice profits, the cost of each lot would have had to increase by $6,600 to the consumer.

The second example concerns another proposed residential development, this one in North Dakota, in a city prone to severe flooding. As most people know, paved areas do not absorb rainfall, so it would seem logical that the more pavement area in a new development here, the bigger the potential for runoff, which leads to more flooding. In addition, the wider the streets, the more surface area the city has to snowplow and maintain. All these issues – the snowplowing, the road maintenance and the increased water runoff – are burdens to current and future taxpayers, with no discernible benefits to offset the burden. So imagine Rick's surprise when the consulting engineer refused to even submit a plan for 50-foot-wide rights-of-way with 28-foot-wide street sections, instead of the 66-foot-wide rights-of-way with 37-foot-wide street sections, as specified by existing city regulations.

To understand the issue, look at the origin of the standard street width requirement. Centuries ago, roads were unpaved, and were built with wide ditches to handle drainage alongside them. The 66 foot length reflected a land surveyor’s chain, developed in the year 1620 by a British clergyman interested in developing a system that would use easily available tools to survey land in the British countryside. His system caught on, and was brought to the New World by British immigrants and used for hundreds of years. Perhaps as recently as 100 years ago it made sense to use a single surveyors’ chain as the width of community streets, and so many towns did so. Today, most cities have eliminated drainage ditches in modern subdivisions, replacing them with storm sewers and more efficient design. These changes have allowed narrower street and pavement widths, with positive cost and environmental impacts.

So — the minimum street right-of-way in this modern North Dakota city is the result of a decision to make roads 66 feet wide, due to the fact that 400 years ago an English clergyman connected a hundred links that were 6 1/2 inch long to make a convenient, 66 foot long "chain". To our knowledge, there is no other reason.

Given that surrounding cities have adopted modern standards, and that the logic behind narrower streets is solid, Rick could have presented a compelling case. But the engineer refused to even make the proposal. Why not propose a common sense solution? Complacency? Perhaps. The desire to comply with every regulation to avoid conflict? More likely. Are the engineers fees based upon the percentage of construction cost, with wider streets guaranteeing higher fees? Also likely.

In the first example, outmoded rules of thumb related to inadequate CAD technology would have cost Rick's client at least $250,000, and would have burdened the local county government with a significantly diminished potential property tax base. In the second example, the engineer's lack of concern for the long-term benefit of his client (with whom he has a contractual or fiduciary relationship), and to the public (to whom he has a professional responsibility), has burdened the community with exaggerated flooding problems and approximately 33% more pavement to be snow plowed and maintained for as long as the community exists.

We can't keep fudging to hide poor practices. If we are ever to achieve a more sustainable world and create better communities and housing products, we simply cannot accept mediocre design, technology and attitude.

Rick Harrison is President of Rick Harrison Site Design Studio and Neighborhood Innovations, LLC. He is author of Prefurbia: Reinventing The Suburbs From Disdainable To Sustainable and creator of Performance Planning System. His websites are rhsdplanning.com and pps-vr.com. Skip Preble, MAI, CCIM is a real estate analyst and land development consultant specializing in market analysis, feasibility studies, project value optimization and market value opinions. He can be reached through his website, landanlytics.com.

Flickr Photo by Billy Hunt: "This is from my photo essay observing the course of development in Charlottesville, Virginia".