Utah Up, Chicago Down: Why Mitt Romney Should Embrace His Mormonism 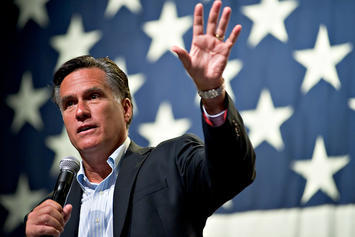 In his run for the Republican nomination, Mitt Romney downplayed his Mormonism—referring only to “faith” or “shared values”—in the face of small-minded members of the Christian right and the occasional cackle from the Eastern cultural avant-garde. But with his party’s nod in hand, Romney has been “coming out” in the run-up to the Republican convention, letting pool reporters join him and his family at a church service, and even choosing a member of the church to deliver the invocation on the night he addresses the Republican convention.

The church’s appeal can be seen, in part, in the contrast between booming Utah and Salt Lake City and President Obama’s adopted home state of Illinois and hometown of Chicago.

Utah netted 150,000 new arrivals from other states in the last decade, while Illinois lost a net of 70,000 people each year to other states. And Utah’s new arrivals include more than Mormons returning to Zion; Salt Lake County is now only 54% Mormon. Twenty-six percent of the county’s residents are minorities, mostly Hispanic immigrants.

Romney himself reflects the enormous changes in the fast-growing and highly successful Church of Jesus Christ of Latter-day Saints (LDS), the official name of the religion, since the church (which continues to have an all-male clergy), opened itself to black members in 1978. Mormons now enjoy levels of education and wealth well above those of the average American.  Some 53.5% of LDS males have a post–high-school education, compared to 36.5% of the total U.S. population. And 44.3% of LDS females have a post-high-school education, compared to a national average of 27.7%. More impressive still, unlike mainstream churches, Mormonism is thriving; the church membership in North America grew 45 percent over the past decade to more than 6 million members—roughly matching the number of American Jews.

A recent Gallup survey ranked Utah first in terms of quality of life, in part because of its citizens’ “low smoking habits, ease of finding clean and safe water, having supervisors who treat workers like a partner rather than a boss, learning something new or interesting on any given day, and perceptions that your city or area are ‘getting better’ rather than ‘getting worse.’”

While Illinois competes with California for the nation’s worst credit ranking, Utah stands at the AAA apex. The job-growth rate in Salt Lake City and the state rank near the top while Chicago and Illinois have sunk relentlessly toward the bottom. Forbes recently ranked Utah “the best state for business and careers” for the second straight year; Illinois ranked 41st.

While Utah undoubtably owes some of its success to its low-tax, low-regulation culture, and to smart incentives to draw in businesses, it’s also benefitted from a Mormon culture that promotes not supply-side but investment-driven growth.

From its origins in the great Mormon migration in the late 1840s, the state and the church have built a legacy of careful planning. Brigham Young was many things, control freak and city planner among them, laying out the streets of the towns with exacting detail. The Mormons, wrote Wallace Stegner, a “gentile” who lived among them, “were the most systematic, organized, disciplined, and successful pioneers in our history.”

Today this legacy is evident in the excellent infrastructure the state is building, including new highways that shame the pot-holed roads that people on the coasts commonly endure. Utahans have invested mightily in their universities, public and private, and are positioning themselves to be major players in fields from energy and agriculture to composite manufacturing, science, and engineering. They are not merely waiting around to ransack the intellectual capital of other states; for the last two years the University of Utah has ranked No. 1 in forging startups, besting institutions like MIT and Columbia.

It is a bit distressing for a Californian to ride down Highway 15 south from Salt Lake City towards Provo and see buildings, often just finished, from some of Silicon Valley’s signature companies including Intel, Adobe, Twitter, eBay, and Fairchild Semiconductor. These are jobs that used to stay in California, but for a host of reasons—regulation and housing prices chief among them—have moved east to Utah.

And most of the former Californians I’ve met in Salt Lake like the place, even if they sometimes feel uncomfortable with the Mormon aversion to such habit as drinking. Over the past 30 years, the city has changed for the better. Good food now proliferates—even if the elegantly dressed young Mormons still don’t order wine, much less vodka. The local arts and culture scene has evolved to, if not world-class levels, at least those seen in other similarly-sized cities.

But what’s most impressive about Utahans may be their devotion to family. Although they make much noise about their dedication to “working families,” the Democratic Party increasingly relies on singles and the childless as its core base, particularly among white voters. In contrast, GOP-dominated Utah (which is largely white, but increasingly diverse) has the highest birth rate and youngest population in the nation. Families thrive there, including those who are not Mormon. It is almost like another America—one where most people raise their children, and push education and enterprise. If you’re getting deep into your 50s like me, you might remember that country.

True, Salt Lake City now has some high-rise residential areas and some local planners, largely from the University of Utah, who push “smart growth.” But the big growth along the Highway 15 corridor is mostly single-family home communities, affordable and large enough to accommodate several offspring. They seem a lot like the places Long Island and the San Fernando Valley once were.

Like the church around which it is built, the Mormon Zion in Salt Lake Valley has also changed. It has what may be the largest concentration of multilingual people in the country. With 55,000 missionaries at 340 mission sites across the globe, native English-speaking Mormons have learned more than 50 languages. Former Utah governor and Romney rival Jon Huntsman gained respectability—even among sophistos—for his fluent Mandarin.

On the business side, Mormons’ linguistic skills have attracted loads of big international companies, such as Goldman Sachs, who need people capable of conversing in Lithuanian, Chinese, or Tongese. Goldman has 1,400 employees in Salt Lake City, making it the investment bank’s sixth largest location in the world.

In contrast to the antediluvian nonsense sometimes expressed by right-wing evangelical Christians, the LDSers have become more cosmopolitan as their faith has expanded. Once a peculiarly American creed, with the vast majority of its faithful living in the Western United States, Mormonism has morphed into a global religion with over 11 million members—more than half of them outside the United States. Once narrowly white, the church’s biggest growth now is in Brazil, the Philippines, and the Pacific Islands. Even in the U.S., converts have made for an increasingly diverse church, with blacks and Hispanics accounting for one in five new Mormons, according to Pew.

It's not likely that the church will be portrayed by the Obama campaign and its associated media outlets in this way. They also are sure to continue portraying millionaire Mitt as the greedy capitalist devil incarnate. Perhaps to avoid getting drawn into a discussion of his faith, Romney rarely mentions that he tithes 10 percent of his substantial income to support church activities. Such tithing, expected of all church members, helps explain why Utahans are easily the nation’s most charitable citizens, according to The Chronicle of Philanthropy—contributing two and a half times more of their income than Illinoisans.

Yet most appealing about Mormons is their focus on self-help and community outreach, and the church’s highly structured and efficient relief organization—something Romney has never communicated well. Mormons are remarkable for their ability to rise to the occasion during natural disasters like Hurricane Katrina and the earthquake in Haiti.

“Mitt may not be Bill Clinton or Barack Obama—he’s a boring guy, but he’s not the jerk people think he is,” says Joe Cannon, the former publisher of the Deseret News, the church-owned paper. “When you are a bishop,” as Romney was in Boston, says Cannon, “you are running a huge welfare state on your own. You spend a lot of time helping the poorest and most dysfunctional congregants.”

In the end, Utah’s Mormon-created reality is bigger than one relentlessly ambitious man’s foibles and tax dodges; Mormonism is the enterprise that transformed a desert province into a productive garden. That’s the story that Romney needs to share between now and November. If he fails, we might see a more appealing Mormon, Jon Hunstman, remind us of this success story in 2016.

This piece originally appeared in The Daily Beast..

WWBgkD I am so grateful for your blog article. Much obliged.

Great, thanks for sharing this post.Thanks Again. Awesome.

MUDazi I think this is a real great blog post.Much thanks again. Keep writing.

Mr. Rudolph, move to California. Rick Perry has served our state well. Compared to some of our reneeseptativrs in Congress, I'll take Perry any day over the likes of Sheila Jackson Lee!! As for President, Perry would restore honor to the office of President of the United States. Barak Obama is a disgrace.

zGGDVJ I cannot thank you enough for the blog.Much thanks again. Really Cool.

XgRbQq I cannot thank you enough for the blog article. Really Great.

Im grateful for the post.Really thank you! Great.

I value the blog post.Much thanks again.

e8DQcM I cannot thank you enough for the blog article.Really looking forward to read more. Fantastic.

Enjoyed every bit of your article post.Much thanks again. Much obliged.

Thanks for sharing, this is a fantastic blog post.Really looking forward to read more. Great.

Thank you ever so for you blog. Great.

Thanks again for the article post.Thanks Again. Really Cool.

Thank you for your post.Much thanks again. Want more.

Say, you got a nice article post.Really thank you! Great.

Thanks for sharing, this is a fantastic article.Really thank you! Much obliged.

I really liked your article.Thanks Again. Will read on...

Thank you ever so for you blog post.Really thank you! Much obliged.

I value the blog post.Really thank you! Fantastic.

Major thanks for the blog article.Thanks Again. Keep writing.

87gRIL A round of applause for your post.Really thank you! Want more.

I am so grateful for your post.Really looking forward to read more. Fantastic.

XIYW2Y This is one awesome blog.Really looking forward to read more. Much obliged.

Fantastic article.Really thank you! Will read on...

Great article.Really thank you! Will read on...

A round of applause for your blog post.Thanks Again. Awesome.

This is one awesome blog.Thanks Again. Cool.