The Expanding Wealth Of Washington 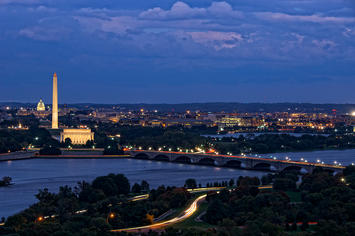 Throughout the brutal and agonizingly long recession, only one large metropolitan area escaped largely unscathed: Washington, D.C. The city that wreaked economic disasters under two administration last year grew faster in population than any major region in the country, up a remarkable 2.7 percent. The continued steady growth of the Texas cities, which dominated the growth charts over the past decade, pales by comparison.

Boom times in the capital — particularly amidst a weak recovery elsewhere — are driving this growth. Since 2007, notes Stephen Fuller at George Mason University, the D.C. region’s economy has expanded 14 percent compared to a mere 3 percent for the rest of the country. Washington’s unemployment never scaled over 7 percent, well below the national average, and is now down to around 5.5 percent, about the lowest of any major metropolitan area. Unemployment of course is much higher, reaching 25 percent, in some of the district’s poorer neighborhoods.

This prosperity is rooted largely in the steady growth of the federal workforce, as federal spending accounts for one-third of the region’s economy. Over the past decade 50,000 bureaucratic jobs have been added in the area while local federal spending grew 166 percent. The D.C. region, with but 5 percent of the nation’s population, garners more than three times that percentage in payroll and more than four times that percentage in procurement dollars.

This debt-financed gusher has helped expand the economy beyond simply federal workers. You think California is the biggest beneficiary of the current tech boom? Think again. Washington’s tech sector employment , according to an analysis by Economic Modeling Systems Inc., has expanded by over 5 percent since 2009, more than twice the national and California average of barely 2 percent. California may have Facebook, Google and Apple, but Washington tech has federal agencies, the defense establishment, a growing media sector and the lobbying industry to feed upon.

Washington also ranks fourth in middle-income job growth, with employment in that category expanding at four times the national average over the past two years. The relatively higher salaries — and far better benefits — propel even modestly educated workers into middle incomes. The recession may have been brutal for the middle class, but not those who work for Uncle Sam. Not surprisingly, according to Gallup, Washingtonians are the most optimistic in the country about the improvements in the economy.

This, of course, did not start with the Obama administration’s relentless expansion of federal power. The Washington region has been growing steadily — well ahead of all major eastern regions — for a generation. The expansion of defense spending under President Ronald Reagan and then again under George W. Bush helped create wealthy suburbs around the city; four of the nation’s five wealthiest counties (the other is in suburban New Jersey) and nine of the top 15 are located in the Virginia and Maryland suburbs around the capital. These counties all enjoy median house incomes over $100,000, twice the national average.

But the biggest change has occurred in the district itself, which last led the nation in population growth in the early 1940s. The hopelessly dysfunctional, crime-ridden city of the era of four-term Mayor Marion Barry in the 1970s and ‘80s has been left behind like the much-maligned 19th century swamp town that aspired to be the next Paris but was widely regarded by diplomats as a hardship posting. Barely three decades after its founding, the city had “not a single great mercantile house,” a foreign dignitary observed in 1811-12, according to “The Age of Federalism,” by Stanley Elkins and Eric McKittrick, and had “a total absence of all sights, smells, or smells of commerce.”

Washington may still not be a great center of real commerce, where people make things or risk their livelihoods on ideas. But it thrives as the marketplace for the collusional capitalist state that has been growing for decades and may now be at its apex. Offices fill with well-paid lobbyists and lawyers, and their service help, as they protect the interests of investment banks, real estate interests and unions that are increasingly influenced by Washington. The central area has been revived by new condo, hotel and office developments. It may still not be Paris, or even Chicago’s Gold Coast, but it’s a fair bit better than the drab, dangerous place of 30 years ago.

No one should ever disparage the success of a region, but there is something disturbing in D.C.’s recent rise. Most expansions of the federal region came to meet a perceived national challenge: the Depression, the Second World War, the Cold War, the Space Race and the Civil Rights movement. Since the Depression, Washington’s “good times” usually have paralleled that of the rest of the country. Only now do we see a “new normal” where Washingtonians, like the pigs in Orwell’s Animal Farm, seem “a bit more equal” than the rest of us.

Will this trend continue? The outcome of the election may prove determinative. In a second Obama term – which should bolster the power of agencies such as the EPA, Energy and Justice – the federal grip on daily life will expand. This could greatly expand the appeal of being close to the capital. When everything from zoning and the location of industrial plants and healthcare is under Washington’s control, the capital could conceivably even emerge as a challenger to New York’s two century reign as the country’s most important city.

Yet as the Washington Post’s Steve Pearlstein points out, this ascendency could be curtailed. Even under a second Obama administration, he notes, “the federal gravy train” could be derailed, with inevitable cuts in spending. Steve Cochrane at Moody Analytics suggests that the Washington as “the leader in terms of job growth and economic strength are really over.”

The election certainly will determine which part of the Washington ox get gored. If Democrats rule, one can expect these cuts to come in large part at the expense of defense firms, which, after all, now tilt to the Republicans. This could be particularly tough on the suburbs, where many military contractors reside.

More dangerous still would be a Republican sweep, which would bring a budget-cutting mentality back to the White House, particularly on the social spending and regulatory apparatus dear to many Democrats . These jobs tend to be in the district. Even a renewal of the current balance of power threatens federal expansion since the House still holds the appropriation purse strings. The oxygen that sustains Washington seems likely to be cutback in any case.

None of this, however, means that D.C. is about to slip back to its dystopian past, much less its swampy roots. The region boasts the nation’s wealthiest and best-educated population. This could give it a leg up on other areas in the tech and business service job markets. Many millennials may find a steady career in the bureaucracy safer, and even more satisfying, than finding places in a slow-growing, hyper-regulated private sector economy.

Yet the key lies to Washington’s future may lie with the fate of the national economy. Eighty years of relentless federal expansion has created a relentless parasite that knows how to feed on its host. But if that host weakens, so too will the federal state. To sneak an early pick for this scenario, hop a flight to Madrid, Rome or Athens, where being tied to the bureaucracy no longer provides exemption from the vicissitudes of economic struggle.

This piece originally appeared in Forbes.com.