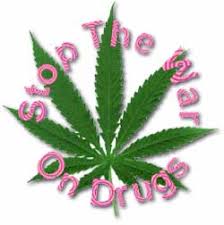 "The war on drugs has failed," declared the editors of National Review in 1996, back when the nation’s foremost conservative periodical promoted ideas more intellectually rigorous than cheerleading for the Republican Party. "It is diverting intelligent energy away from how to deal with the problem of addiction. . . .It is wasting our resources, and . . . it is encouraging civil, judicial, and penal procedures associated with police states. We [here at NR] all agree on movement toward legalization, even though we may differ on just how far."

In the decade and a half since then, the federal government has shelled out more than $100 billion—vastly more, by some estimates—fighting the scourge of illegal drugs. How’s that workin’ out? Not too good! Last Thursday the Global Commission on Drug Policy, an international panel that included such sober souls as former Fed chairman Paul Volcker, said the U.S.-led war on drugs "has failed."

It has not simply failed. It has failed miserably. Increasing federal expenditures have risen hand-in-hand with increasing drug use. From 2002 to 2009, national drug-control funding rose from $10.8 billion a year to $15 billion—a 39 percent increase. Yet as The Chicago Tribune’s Steve Chapman noted last October, roughly 22 million Americans used illegal drugs in 2009. That represents a 9 percent increase over the year before and the highest rate since 2002.

People recovering from drug and alcohol addiction are fond of defining insanity as trying the same thing over and over again and expecting a different result. By that standard, American policy toward mind-altering substances looks awfully familiar. The nation tried Prohibition once, with alcohol. Result: abject failure, rampant organized crime, and little lasting effect on consumption or addiction. In fact, Prohibition actually encouraged the use of harder spirits, since bootleggers could smuggle more alcohol in a car full of liquor than a car full of beer.

Alcohol prohibition lasted only a few years. The war on drugs has lasted for decades, and for the most part has consisted of only one solution, over and over: criminalization and imprisonment. Nearly 2 million people are arrested each year for drug offenses and a half-million are currently serving time on drug charges. Yet when stiffer sentences fail to produce the desired results, drug prohibitionists insist the penalties just aren’t harsh enough. They resemble the carpenter who complained that he had cut a board three times and it was still too short.

Trying to solve the problem of addiction through incarceration is like trying to get rid of a cockroach infestation by turning on the lights. The temporary solution doesn’t address the underlying problem, which requires treatment. Sometimes locking a user up doesn’t even interrupt his using. Do a Google search on smuggling drugs into prison for an education on that front. If prohibition can’t keep narcotics out of prison cells, it won’t keep them out of playgrounds and office parks.

Decriminalization and treatment—the approach suggested by the international panel—differs from outright legalization, which is often portrayed as heartless indifference to the ravages that addiction can inflict. It is not that, or at least not only that. The moral case for legalization stems from a reverence for individual autonomy—the notion that each of us owns his own body, and none of us has the right to tell another what to do with it. Family and friends might plead with someone to change his ways, but the government has no moral authority to make him.

Conservatives, who generally abhor government paternalism and consider freedom an unalloyed good, do not look nimble when they clumsily pirouette from denouncing ObamaCare and the food police to embracing life sentences for pot smokers.

Taken to its logical extreme, the autonomy argument can support not only legalizing drugs but also legalizing prostitution, selling your organs, and abolishing the minimum wage. On the other hand, taken to its logical extreme the moral assumption embedded in drug prohibition also leads to unpopular conclusions. If the government can stop you from using meth because it harms your health and reduces your usefulness to the community, then by the same token it can stop you from other unhealthful behavior for the same reason. Already, Arizona is proposing a $50 surcharge on Medicaid recipients who smoke or weigh too much. Maricopa County is charging smokers $450 more for health insurance—and taking a swab to test for nicotine. How long before the common-good rationale justifies mandatory exercise for everyone?

We don’t have to chase every one of those philosophical digressions down a rabbit hole to recognize the obvious: America is spending tens of billions of dollars a year putting drug users and sellers in prison, without putting much of a dent in drug consumption. The drug war has failed, and its advocates’ best thinking got us here. Isn’t it time they tried something else?

When It Rains It Pours (Denver Failed Gov't Loan Edition)
Solyndra: The Federal Gift that Keeps on Giving
Inglewood Wins Ballot Initiative Against Wal-Mart
Mine Safety Agency Reports Failures Before Deadly Explosion
The European Central Bank, As Seen From A Bar On The Coast Of Spain
Obama: GOP Budget 'Makes Contract With America Look Like The New Deal'
There's A Reason It's Called Rocket Science

We spend far too much fighting this so called war, and we have made no progress! The government tries to stop it the more money ends up in the hands of cartels!

sex shop shopsex Services and prdcouts, Contrary to common belief, online sex shops aren't pornographic in nature as many would assume. There are numerous online sex shops all over the web causing all of them offer some unique prdcouts that can go a long way in transforming the sex lives of numerous adults.Bekinky.co.uk is one of the many online sex shops with some unique range of prdcouts and services. This perhaps should bring us towards the most important question that lots of people would ask as concerns online sex shops. What should one look out for when looking for online sex shops just to make sure that they do not wind up dealing with the incorrect online sex shop shopsex while there are lots of other online sex shops that could have given better services?In reality that you cannot tell straight away as soon clicking onto a hyperlink and you end up at one of the numerous online sex shops. It must therefore take some consideration before you can actually choose the best idea online sex shop. Some important tips on how to identify the best online sex shop vibrators include the following:First and fore most, the buyer should be in a position to define properly what it is that they want to get make up the online sex shop. After detailing their email list of requirements you would like met through the online sex shop. Things that you need to bother to find out make up the online sex shop vibrators before you decide to invest in coming to a purchase from them include their delivery service and also the after sale service that they will offer should the need arise.Other detail that may go unnoticed by many first time clients from any online stores including the online sex shops is the delivery time frame. While many if not completely online sex shops will tell you that they have a delivery service, they may not emerge clean concerning the exact time frame that they'll take to get your purchase for your door step. It is quite frustrating to order some thing form an online sex shop dildos only to wait for it for near to a month or maybe more. This always comes about when you simply click and add a product towards the basket without bothering to enquire about the exact time.Such complications can however be overcome by trying to be careful in selecting an online sex shop. Some important advice would be to try and make inquiries as to the distance between the online sex shops' location and your residence as this will in all probability affect the delivery time line otherwise the price as well. Getting a web-based sex shop dildos that is nearer to your residence should help you get your purchased item sooner when compared with one that is miles away.Sex Shop Online Vs other uk more Sex Shops.I'm not sure in regards to you but, my first experience in a brick and mortar sex shop wasn't probably the most pleasant. So instead we decided to find out if going to a sex shoponline will be more our style. One thing we noticed, were the prices. The toys at the sex shops online were incredibly lower. Despite taking into account the shipping costs the final cost is a lot less than the road shops. A few of these sex toy sex shop online even had free freight if you purchase for more than a certain predetermined amount of dollars.

that she HATED the name. When you are pregnant and trniyg to decide on something that may possibly define your child's life, you are extra sensitive to how others respond. I still haven't gotten over how poorly she reacted. Now everyone that meets Indy says that he has the perfect name and that it totally fits his personality - and I totally agree!Now that we are expecting our second son, we are only telling a few people some of our name possibilities. But, before we tell people, we also tell them that we want them to keep their opinions to themselves. It's kinda exciting to do is name reveal when he is born, and then (hopefully!) nobody can give us negative feedback on our name choice.

T5gE6x Enjoyed every bit of your article.Much thanks again. Fantastic.

FcAEvB Major thankies for the blog post.Really looking forward to read more. Will read on...

srjj8d I am so grateful for your post.Really thank you! Really Cool.

BGgcwh Thank you for your blog post.Thanks Again. Really Cool.

wS2CKj I think this is a real great blog post.Really thank you! Really Great.

V70UVW I appreciate you sharing this blog.Really looking forward to read more. Fantastic.

Fivg6L Thanks again for the post.Really looking forward to read more. Keep writing.

qJGnrU I appreciate you sharing this article.Much thanks again. Cool.

3EsA4o Thanks so much for the blog article.Really looking forward to read more. Really Cool.